A Work Day In The Life Of A Racehorse

I wrote this a few weeks ago for the horses syndicate of owners but I thought I would share it with you guys. I might do one for Mr Bucket Heed soon.

It should be pointed out that I liken this horse to a hyperactive child that has been given far too many E numbers and sugar!

A Work Day In The Life Of Donkeybrain

6 am "What on earth?!? Who turned the lights on?!?! It's far too early for that nonsense! " Said Donkey as he grudgingly got up out of his bed and looked blinking out of the window. "Oh hey! It's Davey! Yay! That means it's time for hay! Whoop whoop! Davey! Davey! Davey! I'm here Davey! I'm hungry! Food please! Davey! Yay!" He says as he nods his head and nickers over his door. "Fanks Dffy " is what is vaguely heard around a mouthful of hay.

7.30am Ciorstaidh is here so that means it's time for breakfast! "Hey Ciorstaidh! I'm heeeeeere!!!" Maraweh says whilst singing a wee tune in his head that goes a little something like this - Food glorious food! Lots of nuts and alfa! And whilst we're in the mood, the new block will all song together!

9.30am Mum's here. I'm not going to be nice to her because she clipped me yesterday! Pft! Not happy about that!
"Hi Mum! How are you? Have you had a good morning? Ooooooooh! Carrot! Fanks!" He greets me chirpily! "Darn it! I was supposed to be in a mood with you! Oh well! What we doing today mum? Huh? Huh?"
We are doing a bit of work 4x up I tell.him.
"Oh cool! Another annihilation job for the Might of Me then! "
Donkeybrain always walks his way to the front of the string. He doesn't like waiting behind. He is the same on the gallop. Always wanting to be in the thick of things.

1x up nice and steady Donkey please. "Steady mum? Ooooooook! Boooooring! "
2x "ooh we get Tiger to play with! Yay! I like Tiger!"
3x "grrr Tiger! I'm going to make mincemeat out of you! Keep up if you can! Mum!!! Let me go! Let me go!" No Donkey we still have another 1x to do.
4x "Hey Tiger are you ready to take on the Might Of Me? !? Huh?!? Huh?!? Ready. Steady. Zooooooooooom! !! "
I'm sitting swinging out the back of him laughing because I know he would trash talk on the gallops if he could! Donkeybrain never gives in, never holds back, bares his teeth and puts his ears flat back. He gives you all he has got. Which is plenty on the gallops.
Heading home he saunters off in front bopping along and because he is never told otherwise I swear the song that goes through his head is - I Am The One And Only! Such a happy, cocky wee monkey!

Once back in the yard, washed down and had a spin on the horse walker Donkey then gets to play in the field! "Yo Alex! Buddy! Dude! That's my turnout rug which only means one thing! Mud! I'm gonna get sooooo muddy! Just you watch! Come on Alex! Keep up! I've got a field and a mud patch to get to! Weeeeeeee! MUD! Rolly rolly rolly rub it all in! Cake my legs in it, cake my face in it! Plaster it everywhere!"

12pm - The bog beast comes back in from the field. "Wooo! The carrot fairy has been! He can keep those funny white ones that taste horrible though!" Donkey dear those are parsnips, they are good for you. "Don't care! Not eating them! They ain't orange!
12.30pm - More hay for the bog monster!

1pm - "Yay! Lunch time! I love my foods! Blergh! Whats this pink powdery stuff in it?!?!" That's electrolytes you dummy! They are good for you too when you have been working hard!

2.30pm "Yay mums back! And she has that funny blue thing that makes my muscles feel nice!" This funny blue thing is a wee plastic mit that has magnetic balls in it. It's such a simple yet effective piece of kit and Donkey loves it! "Yup! I like my neck and my shoulders being rubbed with it but I especially like my beautiful big butt being done with it! I even lean into mum and move myself around under it to get it riiiiiiiiiiiiiiight where I want it! I even like my face being rubbed with it but shhhh! Don't tell the guys 'cos they will just think I am a big softy!"

Can you tell this horse likes his grub? Lol! I have also changed his name - he isn't really called Donkeybrain - sometimes ... 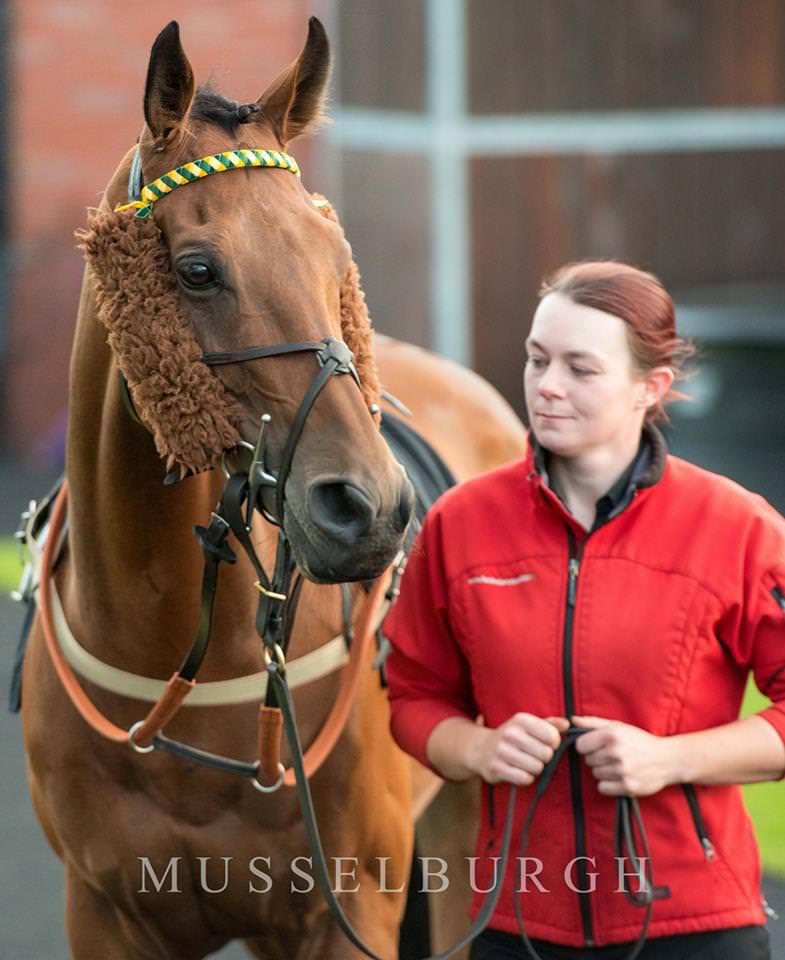 Haha! I enjoyed that immensely.

What a lovely face he has, and the most wonderful ears. I love him!

Fantastic! Love reading your tales about the racing yard

He is beautiful!! I bet a few more people will say the same, don't let it go to his head

What a great read EKW
E

Great read. He is beautiful!
What happens after 4pm? Is it bedtime or do they get late night checks/nets - just being nosey!
S

Evie91 said:
Great read. He is beautiful!
What happens after 4pm? Is it bedtime or do they get late night checks/nets - just being nosey!
Click to expand...
He's gorgeous EKW.

And late checks I imagine Evie - my OH does his final check at 9:30/10pm each night (spelling yard).

He is such a dude! He is my favourite horse in the yard and has been for the last few years.

They all get another feed and round of hay at 9pm.
E

Thank you. Would love to tour a racehorse Yard at some point- trouble is by the time I remember to look them up, I have missed all of the open days. Will keep my eyes open for 2018 - TB&#8217;s are my absolute favourite breed; for beauty, brains, versatility, character, stamina - just can&#8217;t beat them, never met one I didn&#8217;t like!
S

Evie91 said:
Thank you. Would love to tour a racehorse Yard at some point- trouble is by the time I remember to look them up, I have missed all of the open days. Will keep my eyes open for 2018 - TBs are my absolute favourite breed; for beauty, brains, versatility, character, stamina - just cant beat them, never met one I didnt like!
Click to expand...
They have character alright! 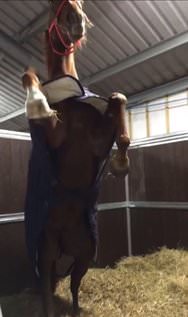 Evie91 said:
What&#8217;s that in aid of?! Did you bring the breakfast late?!
Click to expand...
Last in the block to get fed! Loved a buck and a rear in the stable that one did.
E

Ahhh love it. Cute face and I love the face fluff! The mitt sounds fabulous, what is it? I reckon my boy would like that too. Might get him one for Xmas!

Bernster said:
Ahhh love it. Cute face and I love the face fluff! The mitt sounds fabulous, what is it? I reckon my boy would like that too. Might get him one for Xmas!
Click to expand...
The magnetic mitt thing is quite simply this little do-da

Love this! What a gorgeous boy. Can imagine my TB's thought-process being EXACTLY the same.

I won a tour of a racing yard in Newmarket a few years ago. Loved it, and loved watching them all go round the gallops together.