Best mask in terms of eye clearance for Welsh Sec A?

We have around a million fly mask brands here due to having an Appy prone to uveitis, but I can't seen to find one which satisfies me in terms of fit for our Welsh Sec A loan pony with weepy eyes. He has the typical little Welsh head with bulgy little eyes (sounds awful, he's very cute, but you know what I mean!). Big eyelashes too.

We have a Premier Equine Buster, an Equilibrium and one of the Rambo beekeeper style ones - the latter has great eye clearance but is a weird fit behind his ears and I don't feel that it's super comfortable him. The PE doesn't give enough clearance and the Equilbrium sits low on his nose. My fave mask for the Appy is a Kensington Uviator and they do make a pony size but not sure if there would be enough clearance for eyes and eyelashes in pony's case.

I saw Maxima make pony ones but think they all have lycra ears which we don't need and prefer not to have.

Thoughts on a postcard. Thanks!
H

they are the lycra with big buggy mesh eye covers.

I love the bug eye ones. Great clearance and seem really comfortable. Flies cannot get in. I wouldn’t use anything else now. https://www.lemieuxproducts.com/horsewear/fly-protection/fly-masks/bug-relief-half-mask

Equivisor. Painfully expensive but has saved a lot of vet bills and heartache for my mare. You will need the black mesh visor over the top in summer.
T

Location
A ray of sunshine 🌞

Admittedly I don't have a wee Welsh but the Shires fly masks fit a broad faced cob, standardbred and QH really well.

This is what I have

Thanks all! I’ll take a look at all of these.

I have a Shires one for my Welsh A... seems to work fine for her. 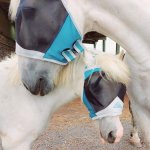 shires like the on above welshies have chubby cheeks so unless a teeny welshy get a full and do some stitching on the sides where the velcro is to fit, but does give plenty space for the eyes. i got fed up bying pony sized fly masks and the welshy couldnt open his eye lids. the lycra are lovely but come off too easily

Location
North and East, of England

I checked the size of my Shires one that Little Dragon is wearing above and it is a small pony and very generous on her.