Some of you on here may recall that I got my first "pony" years ago and he set me on the dressage path. Unfortunately he did his tendon last year and as a result has become a beautiful and much loved field ornament. He is now completely field sound and suitable for a spot of light hacking and I cried my eyes out when I was able to get back on board.
My twins are now at a riding school and pony club centre that ran a dressage competition during the school holidays. And I had a silly idea...
I didn't tell my kids and on the morning of the show I snuck off to "ride my other one" but 2 hours before their tests I reappeared at the house with the trailer on the back of my car and a rather special horse inside. Their reaction was like seeing the presents under the tree on Christmas morning. 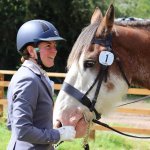 We just had a lovely day out. I cried several times out of sheer motherly pride for all 3 of my "babies". For a horse that hadn't left his field since last November he dealt with it like the old pro that he is, tied to the trailer for hours while we attempted to get a field kept monster show ring acceptable and in strange surroundings with lots of excitement. When I took him home he was tired but it was obvious that his day out had cheered him just as much as the kids!

https://www.facebook.com/video.php?v=308772723538752
I have always told my children that it doesn't matter how you do as long as you try your best and get to take the best horse home but I was rather chuffed that the old man turned on the charm against the 12hh ponies and won the class for my daughter, not to mention that her twin brother took best turned out prize so I had 2 happy children that night.

An 18.1hh clydesdale shouldn't be the ideal mount for a pair of 7 year olds who had never trotted a 20m circle until that day and I know in proper lead rein you should only be attached to the noseband but we had so much fun! After all, isn't that what it's about?

Thank you for sharing.
M

Location
In between the Midlands and the North

Absolutely fantastic!! Thank you for sharing.

It's a day your kids will remember forever I'm sure

That is lovely
Your horse is lovely and so are your twins. I am a twin too
P

How lovely, what a wonderful idea!
S

I love that you did that. Lovely horse + happy children = my melting heart.

I'm getting soppy in my old age.
T

Fantastic, well done to you all 😍
C

Fantastic story. Your horse is lovely and has the kindest face.

Heavy horses are great with children.
It was lovely to see you and the whole family out having fun with your 'first pony'. Here is mine doing an online in hand show with a 7 year old.

Congratulations Abbijay for making a super day you will never forget 😊

Lovely! It looks as if you all had a brilliant time
I wonder how many of the riding school children went home and pestered their parents for a Clydesdale

cauda equina said:
Lovely! It looks as if you all had a brilliant time
I wonder how many of the riding school children went home and pestered their parents for a Clydesdale
Click to expand...
Hopefully lots!! Me and Alfie did a dressage demo at their Xmas show back in 2018 so I'm hoping we've started the love of big horses in a few of them. Alfie also carried Santa in with his presents for the kids. My kids are basically convinced that this horse is magical!

Location
Keeping on, keeping on...

That looks like a fabulous day out! Lovely photos too.

Yes AJ, that is exactly what it is all about or should be. Thank you so much for sharing. You have a lovely family.
E

Lovely and what happy photos
B

That is wonderful.
P

That's so lovely it's actually made me a bit tearful, what a great day you must have all had and that is what it's all about at the end of the day.
H

Echoing all the previous comments here . . . lovely story and thank you for the pictures! They'll never forget the day you surprised them with a horse. <3
S

Fantastic. Thank you for sharing.

Location
Tiny farm some where in UK

I think I’ve got something in my eye! These photos are just lovely, what an amazing horse. Bet the kids just loved it x

Brilliant, and your pic too orangeandlemon!
P

What a fabulous time you all had! I am so envious - that time when the kids are just competent enough to do a competition and enjoy it - but you still get to be 100% involved. All 3 of your "babies" looked amazing and while "taking part" is important, at their age a rosette is always an added joy for everyone. Brought a lump to my throat.