For well more than a third of my life, Jonna has been by my side. But my lovely little princess, who loved treats and to please me, who I never really needed to train to be well-behaved, whose lead I years ago could hand over to my youngest nephew S out on long forest walks and tell him that whatever he did, he was never ever allowed to let go of her lead until he gave it back to me, because with her he would never get lost since she would always find me, who I trusted 100% to walk patiently with S, who genuinely only had 1 single fault and that was to always prefer to know where I was, who was a gift I don't know what I did to deserve, she died this morning at the vet clinic, 16 years, 10 months, and 6 days old.

We of course knew how old she was, we also knew her liver was on its last leg, but it's still difficult. Deep down, I'm so grateful to have been blessed with having her this long, but at the moment my heart screams, and it hurts so much.

She was her completely normal self yesterday morning, and later in the day jumped up in, and out of, my Broom when we went to buy some more supplements to her, and Beata, behaving in a way which not gave me any reason to think that the end was near.
She was her usual self during the walks, but only ate half her meal at 20 o'clock, didn't want her daily gnaw bone, and after the last walk before midnight, she only wanted to eat the most yummy things I offered her. When morning came, she walked out to pee in the garden, but we could tell she was tired, and I could only get her to eat some pieces of cat food, before I called the veterinarian.

She stopped to have a good sniff at something near the vet clinics doors, and she couldn't resist eating a few pieces of dried liver treats I gave her from one of the vet clinic's treat bowls, but soon didn't want any more. The nurse gave her a syringe with calming stuff, and it didn't take long before she fell asleep. Her heart maybe continued beating, but if you ask me, I think she was gone before she got the euthanasia drugs.

We took her body home, she will soon be buried in our Summer home garden with our previous pets, but for now she's lying on the floor so that Beata, Blomma, and Cilla the cat, can say goodbye to her.
The situation is not made easier by that the vets found cysts in her daughter Beata's liver a few weeks ago, and Beata's sister, Blomma, is the same age as her, soon 14 years old, so realistically, anyone of them could soon follow Jonna. But Beata rolled in the grass in the garden today as usual, so hopefully, that's a worry for another day.
But a piece of myself is missing. It's taken me hours to write this because I keep starting to cry. At least I still have the others to take care of, and a routine with them which needs to be followed.

It doesn't feel as if any of my words can truly do justice in describing Jonna's lovely, gentle character, and greatness. My precious princess, my lovely little Jonna, thank you for these years.

(From February this year) 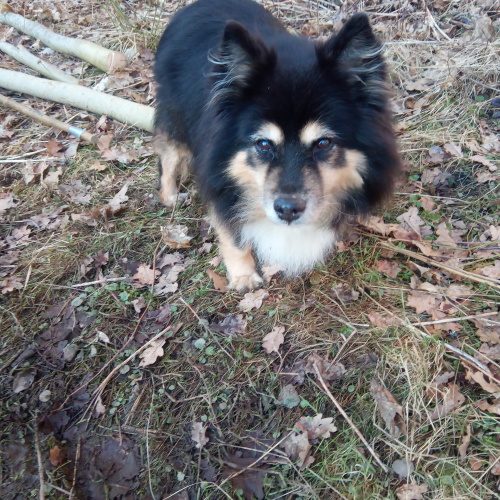 (From last year, lying on the backseat in my Broom) So very sorry - and a beautiful tribute to a much lived little girl.

So sorry to hear that you have lost Jonna FL, you always sound in your posts like you love your dogs very much, and that they mean a great deal to you. I lost my dog of a lifetime last year, and it felt like loosing a physical part of me. I am sorry that you are having to go through this, and I hope that you and Beata and Blomma are as ok as you can be with the loss. It sounds as though you took great care of Jona and put her needs first until the end, she was a lucky dog to be so well looked after. Of course you won't forget her but I hope the loss becomes easier with time.
A

Oh I am so sorry to read this news, FL. Try to take comfort from the fact that she had a very long and happy life with you, with her every need attended to, right up to the end. If only all dogs had such a great life.

So very sorry for the loss of your beautiful Princess. RIP Jonna, little Finnish Lapphund you were loved so dearly and always will be.
S

So sorry for your loss. She was clearly very loved, knew it and loved you very much too. Take care, FL xx

ive got something in my eye, your love shines through in this post, when i saw the heading i said OH NO...so very sad for you, take comfort in her long happy life where she was always loved. i lost my collie cross last june at 15 and although i knew her time was coming, its still such a shock....look after yourself xx
S

So sorry to read this. But you and she, and then her daughters too, had a wonderful time together from all that you have written. Best wishes to you, Beata and Blomma xx

Over the hill and far awa

So sorry for your loss, she had a long life well lived. Please take care of yourself

I’m so sorry. She sounds like she had a lovely life, walking in the forest. What a beautiful dog she was.

Location
The Wet West of Scotland

So sorry, FL, she was obviously a very special girl.
V

What a wonderful tribute. Your heartache and your love for her shine through.

I also seem to have something in my eye reading this. It hurts so much, but she had a long and happy life with you. In time, you will be able to treasure tha happy memories.

So sorry for your loss.

So sorry you had to say goodbye, she sounded such a lovely girl and you clearly loved her more than words can say x
S

Ears of a horse

I'm so sorry FL. I've been following your posts, and your love for your dogs has always been a joy to read. You gave her the best life, and the best end. Give the others a big hug, and look after yourself x

I’m so sorry. She was a beautiful little dog.
M

RIP beautiful girl. FL I am so sorry for your loss. I lost my little shadow 2 and a half years ago and your post brought it all back. But it does get better and you are so right - we are so lucky to have these special dogs, they are a gift. Thinking of you.x
A

I'm so sorry for your loss, what a beautiful girl.

So sorry that the borrowed time had come to an end. RIP wonderful girl. Run free where you are a perpetual puppy.

I'm so sorry FL. Take care of yourself.

I'm so sorry for your loss, FL. You gave her a wonderful life full of love and care and that is all we can do.
Take care of yourself. x

I’m heartbroken for you Finny . That is a beautiful tribute , I know how hard it must have been to write . Sending you much love . Run free Jonna x

Oh I am so sorry FL. RIP lovely Jonna. Thinking of you.

I’m so incredibly sorry for your loss.xxxx