These really are the nicest bunch of people. Well organised, friendly, really look after the field and a very tasty hunt tea afterwards. Not manic at all but lots of galloping and optional jumps. We did our first hedge - yay. Two amazing moments of watching the hounds steaming off into the sunshine with the 1st field behind. And then riding into the end of a rainbow - didnâ€™t see the pot of gold but that was pretty special. 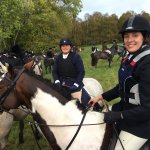 Exciting! Left my boy lovely and clean on sat night. Arrived Sunday and he had slept in his poo, had two massive poo stains on both flanks and another round of bathing that morning. Greys!

Ahhhh sounds amazing. I'm so jealous; I went out autumn hunting on a borrowed horse and planned to take my own boy out at least a couple of times on quieter/easier days this season. But I've broken my hand badly and will be out of action for probably at least another 2 months. No way I'll get him fit enough then in time before end of season so have resigned myself to another season without hunting, and am whipping his shoes off, giving him a break while I recuperate and then starting again (hoping to get him sound barefoot eventually but we'll see!).
Will live vicariously through others until then - keep the posts and photos coming!
You must log in or register to reply here.
Share: Facebook Twitter Reddit Pinterest Tumblr WhatsApp Email Link