Just a quick update as I've had a couple of HHOers message on Instagram to ask if I'd be making a post. It's been quite an exciting month here for me and my trio, with Flower going away for backing on the 1st and Mary's five-year anniversary on the 11th. It's very much been a period of firsts, which has been made all the more exciting by my Timehop flashing up lots of memories of Mary at the same age. It's crazy now to look back and realise how much of a baby she was when I got her!

Flower has made me proud from start to finish. Despite never having seen a horsebox before, it took less than five minutes to load her and she travelled like a pro. She called a little for the first couple of days after arriving but was pretty quick to settle in and has behaved impeccably. Lunging was the thing she struggled most with - as the lady who's breaking her said, "she's a horse who likes to live in your pocket". She's always struggled to see why she should walk around you in a circle when she could stand next to you and have cuddles, but she didn't take too long to get the hang of it, and then she was off.

Mary has coped surprisingly well with Flower being away - in fact, she hasn't given it a second thought! Because our pony comes in overnight, she's been stabled next to him and is loving her home comforts. We've been doing plenty of hacking to keep her occupied (not that she's bothered), which she's enjoyed immensely. It's crazy to think my brave, enthusiastic turbo cob is the same nappy four-year-old who arrived, but somewhere along the way she really has morphed into my dream horse.

These are just a few of our recent hacks. Those gorgeous, pricked ears say it all, don't they? 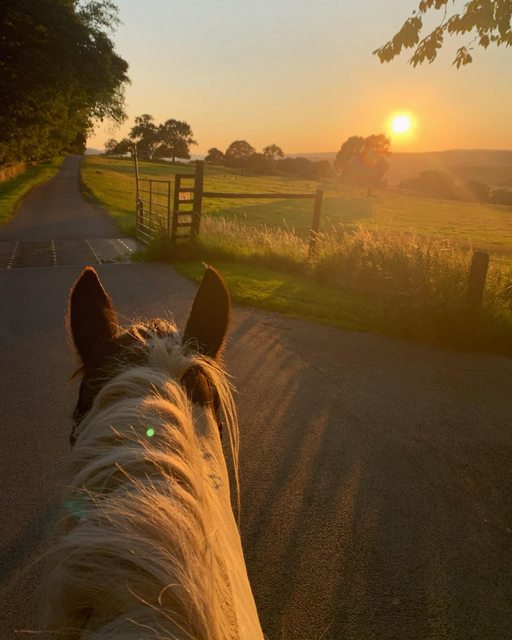 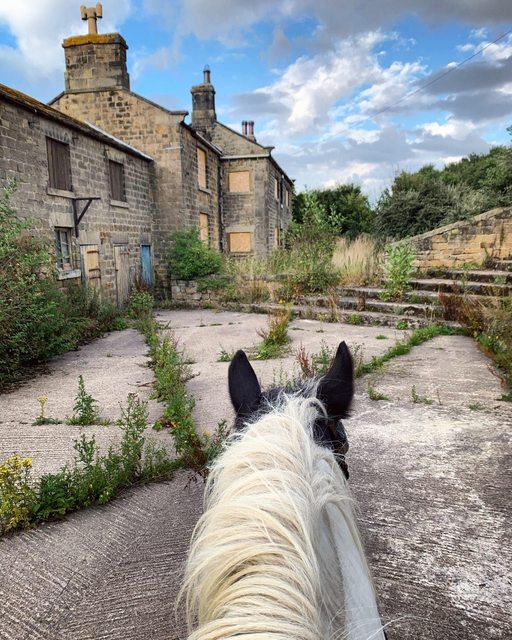 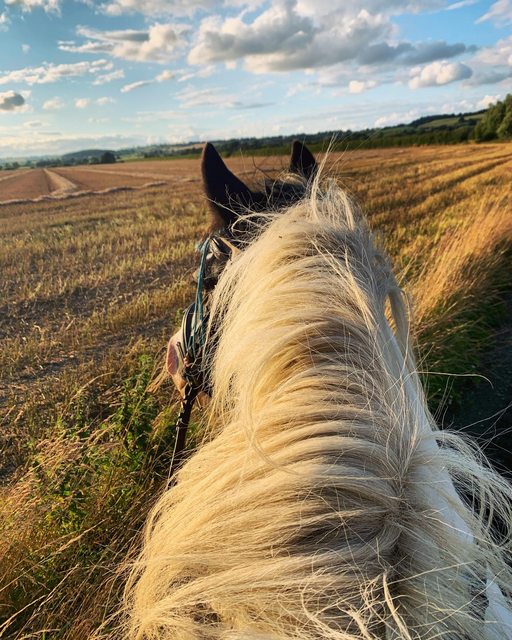 To really show you the transformation, here she is at four (I love seeing these pictures next to the ones of Flower at the same age) and now aged nine. 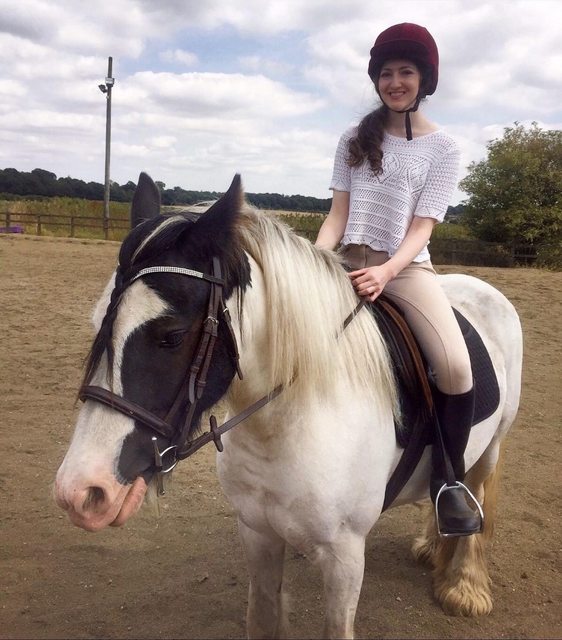 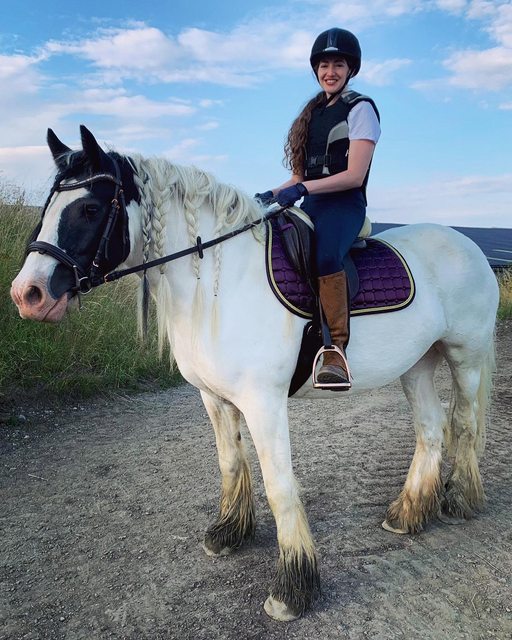 Now onto the most exciting stuff! I've officially had my first ride on Flower! After being led around with a rider for the first time on Friday, she had a rest day on Saturday, and then I was invited up for a turn on Sunday. Despite vastly too short stirrups (the lady breaking her is about half a foot smaller than me!), I felt so at home on her. The feeling of sitting on the horse you've bred for the first time is honestly indescribable - I don't think I've ever had a bigger smile on my face. Here she is in all her grown-up glory. 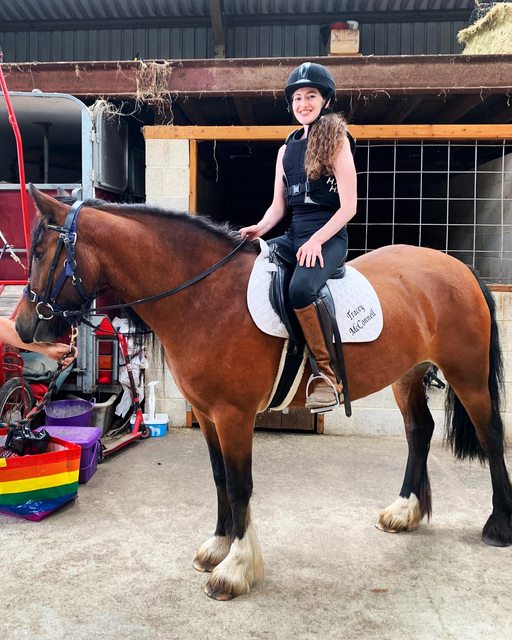 Apologies for the essay, but I know there are lots of you who are quite invested in her progress!

P.S. I hate to be that person, but please no criticism or unnecessary comments. This is a happy thread, and my last one of those derailed into a discourse on the dangers of long manes I know their manes are long. I also know they're not the slimmest, but I try my best and that's all you can do. What they are is happy, well-loved horses with an owner who couldn't be more proud of them

You look so at home on both of them, and your smile says it all. Sitting on your homebred for the first time is nothing short of magical. Congratulations.

no critique from me, mary looks great but flower looks absolutely fabulous, i have loved her from the minute you put photos up.....she looks like a good fit for you and you look so happy. they look like the right weight for leisure horses at this time of year...you have done a good job with them both, and what a lovely BOGOFF
B

Thank you, that's a lovely update.

Check out Flower. How exciting. I know how special it is to sit on a homebred.
P

I love them both. You really got a lucky catch when you brought one mare home and now have two amazing ponios 🥰

Gorgeous horses and thank you for the update. It's lovely to see them both all grown up. Time seems to fly by watching these foals progress.
M

I think I remember Flower's BOGOF thread - it's crazy that she's being backed now!

What a credit they both are to you 💕

They're both lovely but Flower has grown into a really special girl. I'm not a cob fan but she's a real stamp of one.
T

Location
A ray of sunshine 🌞

Lovely update and photos!
A

Congratulations, they both look amazing, you deserve to be very proud. Lovely pics!

Flower is lovely. They both are but I prefer the solid coloured ones! I think they're both fine weight wise as well!

They both look lovely! I will be looking for a Mary when I buy my next steed, she wounds wonderful (although hopefully minus the BOGOF, Flower is wonderful but I think I'd have a coronary with the stress!)

What a fabulous update with great happy pics.
But where has the five years gone?
I loved the BOGOFF thread.

Thank you for the fabulous update, they both look great and Flower has grown into a very lovely horse. Great job 😁

Time really does fly. I can't believe she is now all grown up, it only seems like 5 minutes ago that she was born.

I love that photo of you on Flower - you look very happy, she looks very relaxed and you both make a good partnership!
Thank you for the update

Still the best bogoff ever 😁 Tell her to watch out, though, she has competion with Caol Isla's this year colt.
.
A

How exciting! I've followed Flower & always thought she was a stunner!

What a lovely update - and fantastic pics too!
A

Love a Mary and Flower update. I can't believe Flower's old enough to be started under saddle. I think they both look great. What are the plans for Flower now?

Flower is never that old?! Time has flown! She’s still absolutely gorgeous and the best BOGOF ever 😀

Annagain said:
Love a Mary and Flower update. I can't believe Flower's old enough to be started under saddle. I think they both look great. What are the plans for Flower now?
Click to expand...
That depends on what she likes doing! Mary and I are big fans of hacking, and I imagine that will be Flower’s main job too. However, if she shows a penchant for something else, then who knows!

The plan for now is to do some autumn hacking and see how she feels before I decide whether to carry on doing little and often or turn her away for the winter. With Mary, I kept her in work (until Flower made an appearance anyway), and I’m leaning toward doing the same this time around.

I also have a younger sister who’s crying out for a ridden horse, so it’s possible she’ll do some of the riding and then we can get her and Mary out together.
A

I have a very soft spot for Flower and Mary and I've always loved your updates. You've done them proud and they you. Is Sheepie still around?

The property in photo 2: is that your livery yard or a random unloved property?
W

Oh how exciting! They're both looking fantastic, congratulations. I'm so pleased it's all going well with them, I hope things work out riding with your sister.

Arzada said:
I have a very soft spot for Flower and Mary and I've always loved your updates. You've done them proud and they you. Is Sheepie still around?

The property in photo 2: is that your livery yard or a random unloved property?
Click to expand...
No, Sheepie eventually went back to living with the other sheep! I imagine she’s popped out a few lambs since I last saw her

Thx for doing an update. Love the pictures. Can’t believe it’s been so long. I can remember your bogof thread, amazing that she’s now being backed. Must be the most awesome experience.