How would you price him?

My partner and I have just had an offer accepted on our first house. And
ng up to the reality that running three horses and a mortgage isn’t going to happen. I’ve managed to reach this point in my life and never sell one, but it’s time to be a grown up.

The older two I can run relatively cheaply, they don’t need loads of lessons or outings to keep them going. They’re happy hacking and schooling and if I’ve got some spare cash we can go to some parties.

Podrick, however is five. He’s been given the time he needs to grow and mature and he’s now at the point that he needs to be going out and about and doing more and I’m not going to have the budget to do it - I’m absolutely gutted because he is a lot of fun.

I’ve no idea how to price him, whether to ask my trainer to sell him for me, or how to vet the potential buyers? I think a huge amount of him, and I’ve had him since he was a yearling. I would very much like him to go to someone who will adore him as much as I do, but who has the time to devote to him. He deserves it.

He’s a 16.1hh, 5yo gelding. His breeding isn’t recorded as he was a mistake and the breeder wasn’t certain which Arab colt got to the mare. 🙈 But the mare was out of a Ben Faerie mare and by Primitive Rising. (Shares a dam line with Faerie Dianimo).

He’s a compact, talented young horse who enjoys his work and is a very quick learner.

He hacks alone or in company and goes first or last. He’s never strong. And is good to box, clip, shoe etc etc.

He has had a couple of Dressage outings, done a couple of Show classes and is jumping very well in his lessons away from home.

Where do I start, and how do I get through it without breaking down in his mane. I’m welling up at the thought of it. But with my sensible head on it is the right thing to do. 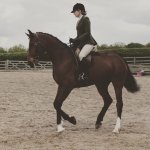 Current market £10-12k. I know it's crazy but he's got fantastic lines on his mare's side. Rather than putting him on the open market, you can do it discreetly and put feelers out via friends/trainers. He looks a lovely sort. If a pro could take him out BE and do well, you can easily go £15k

Congratulations on the house!

He looks a real quality young horse- the Arab sire will put some people off. Any chance your or your instructor could run him round a couple of events? I think he will have quite a decent value but people will feel more secure paying money for something that has started the job

Nice horse, jump him around a couple of 100s and in the right yard you should see somewhere between 12-18 depending on how he rides and vets

NO idea on price sorry, but just wanted to say he is oozing quality, I love him, great dam lines too. What a pity you have to part with him, must be gutted.

Oh my, what a beautiful horse! If we had space (and a handy lottery win) I'd be very interested! Good luck with the house move, very exciting indeed. Don't worry about him, he's going to sell easily! Xx
I

12k easily, and as everyone else said, do a couple of double clears at BE and you can add a good bit more.

If you are prepared to give up 10% commission plus a few hundred in livery fees he wouldn't stay more than a couple of weeks on a reputable dealer's yard. That way you can avoid all the fuss and upset of showing him to people (not that you'd show him to many, the first will probably buy him unless they've overstated their own riding ability.) Price wise at least £10k in this market, maybe more, he's a very nice horse hitting a lot of sweet spots in age, height, looks and ability.
.
M

in this market I think you could name your price, I know a mediocre horse bought for under £6k 3 months ago being sold for £12k now and no real work done..just a couple of shows. I’m sorry you have to sell it’s a brave grown up decision.

I am sad for you because he’s a lovely horse and exactly what I used to love when I was younger .
I would say 12k and he will be down the road before you know it if you marketed him a bit got him out BE and he can get dressage percentages around the 70% you could quite easily get around 18k .
B

I was going to say around 12k in todays market too.
T

nice, i like the bit of arab, that would draw me in, his moms breeding is very good, its so obvious from the photos what a super job you have made of him and what great potential is there, i would ask high, the sky`s the limit for something good and nice and genuine with the breeding behind it
P

TheMule said:
He looks a real quality young horse- the Arab sire will put some people off. Any chance your or your instructor could run him round a couple of events? I think he will have quite a decent value but people will feel more secure paying money for something that has started the job
Click to expand...
Why would an Arab sire put people off? Lots of top competition horses have high percentage Arab blood it adds quality and stamina to a lot of other breeds.
P

He looks a really cracking horse I don't think you will have any trouble selling him.

He’s a small horse and there’s loads of people for whom the 16.1 is ideal including myself and it’s hard to find them , I think he’s very desirable .
On the Arab I think it depends on how he goes on the flat if he’s easy sensible people will buy the horse not it’s breeding even if they are not Arab fans .
Last edited: 15 June 2021
Y

He is a lovely stamp of horse and of a size that will suit many. At least 12k as people are saying. I know someone looking now for whom he would be absolutely perfect!

Pinkvboots said:
Why would an Arab sire put people off? Lots of top competition horses have high percentage Arab blood it adds quality and stamina to a lot of other breeds.
Click to expand...
I'm not saying it should, I'm saying it would put some off.
It's not common in eventing in this country to have an Arab sire so many people aren’t specifically looking for it and Arabs have a reputation for being spooky/ a bit tricky in the conformation for the dressage phase.
Of course in countries like France they value it a lot more and it wouldn’t be unusual to have a SF/ AA out eventing.

Re the Arab bit, I'd just point them in the direction of Tamarillo. Wasn't too shabby eventing despite/because of his rather heavy Arab influence... https://www.allbreedpedigree.com/tamarillo5 http://www.biddesdenstud.co.uk/stock/tamarillo/

If I had 12 grand I would collect him now he is lovely and to be honest worth every penny of his money. A few good runs and a couple of good dressage score he might even pay a huge chunk of mortgage off too

Agree with at least 12k. If I wasn’t having one vetted tomorrow I’d bite your hand off for him! (I still might if tomorrow’s vetting doesn’t go well…)
T

I'm looking for exactly this kind of horse and when I enquire they are 12-15K. That's without any kind of BE record. (I don't even bother asking about those ones!) My budget is 10 and I can only find 4 year olds or 5 year olds who have some sort of problem for that. So yes echo all the others. 12k mimimum.

I can't help on price, but just to say that my loan horse has just gone to sales livery and it might be worth doing that to avoid dealing with the stresses of advertising, fielding calls and showing him yourself. The yard Danny's gone to has a good reputation, mostly for jumping horses, and currently horses are selling before they can advertise (presumably from their existing client list / general enquiries) so the livery cost shouldn't be too high.

He looks a lovely sort and it must be an extremely tough decision to sell him. Best of luck x

Nicnac said:
Re the Arab bit, I'd just point them in the direction of Tamarillo. Wasn't too shabby eventing despite/because of his rather heavy Arab influence... https://www.allbreedpedigree.com/tamarillo5 http://www.biddesdenstud.co.uk/stock/tamarillo/
Click to expand...
He was also known for being a pretty tricky character!

Huge thank you everyone - you've been really helpful.

However. I think I must be the luckiest girl. My partner and parents staged an intervention last night and told me that I wasn't allowed to sell him. That I've worked too hard with him to let him go now. They've collectively, very kindly, said that they will help with his costs. I'm blown away - they're brilliant. He won't be able to stay forever. But it will give me a chance to make sure he's a thoroughly well rounded, well educated and polite individual and it gives me a chance to enjoy, what I think is, the most talented horse I will ever own.

He went on his first Hunt amble last night. It's the most exciting thing he's done by a long stretch and I was expecting a little high jinks. He stood nicely. Was a bit lit up at first and he did show how athletically exuberant he is a few times in the first 20 mins - yes he is that springy when he's jumping too! But by the end he was marching along whilst we had a natter, cantering politely at the back and thoroughly enjoyed himself.

What lovely news! I'm so pleased for you!

That's the best update ever! It's clear that you click with this horse so much and that is something that can be so hard to find, so I'm thrilled that you can keep him.
T

so pleased for you and the horse, sounded such a shame to lose him just at the moment he is on the brink of his adulthood, and to not have to worry what might happen to him after all the work of rearing him you will be the one to enjoy him