Just thought I would share a few piccies and words about the bonkers dog, also known as Willow. She's been here several months now and quite a lot has happened to her in those few months but she takes everything in her stride...............it's me that needs the tablets!!

I'm not sure if I posted before about discovering her luxating patellas. If not, both knees dislocate but the left one is worse than the right and the dislocation wouldn't correct itself in this leg. Long story short, I was persuaded to send her for specialist surgery to correct the knee and off she went at the end of September. Eight VERY long weeks of strict cage rest (for a young springer this wasn't easy) and unfortunately we're not much better off and the knee is still dislocating, albeit not as bad as it was before.

There won't be any further surgeries, especially if the outcome isn't guaranteed, so she definitely won't be getting the other knee done. We've now started hydrotherapy, which she's taken to like a duck to water, so will continue down this path in an attempt to manage the condition non-surgically. She's lost about 6kg in weight which should help massively with her knees (and other joints) in the future. She's allowed back out on short lead walks, which has made such a difference to her energy levels and it's so lovely to see her out and about again.

The really massive change in her however has been her reaction to strangers and people in general. She was soooooo very timid when she first arrived and did a lot of panic weeing, especially when new people attempted to say 'hello'. If you made any attempt to hold her collar, she would really go to pieces, do a wee, then almost collapse into herself. I commented to my neighbour at one point that it's like, the lights are on but no-one home. Sometimes the lights weren't even on which started me thinking she had some sort of neurological / eyesight thing going off at one point. Those concerns were totally unfounded and she just needed time to realise the world is OK really.

She now greets most people with a daftness only a springer can, which is wonderful to see. I'm so pleased for her that she now feels relaxed around people that she doesn't immediately regress to fear. She's definitely going to be a dog that doesn't 'hang on' to her past and will be a 'live in the moment' gal. Just this week she's had a proper lovely fuss with a lovely chap we met out walking. He had a walking stick and even that didn't bother her. She thought the Virgin Media salesman was a right dude and the postman is totally the new best friend for life!!

On the downside, she's still a total nightmare to walk on a lead. Pulls like an elephant and bounces in front of my feet like some bonkers zebeddee creature. Needless to say, this is still a work in progress! She does still chew, given half a chance but she's not as bad as she was. Love her to bits, the wonky donkey

I'll shut up now and post a few pics 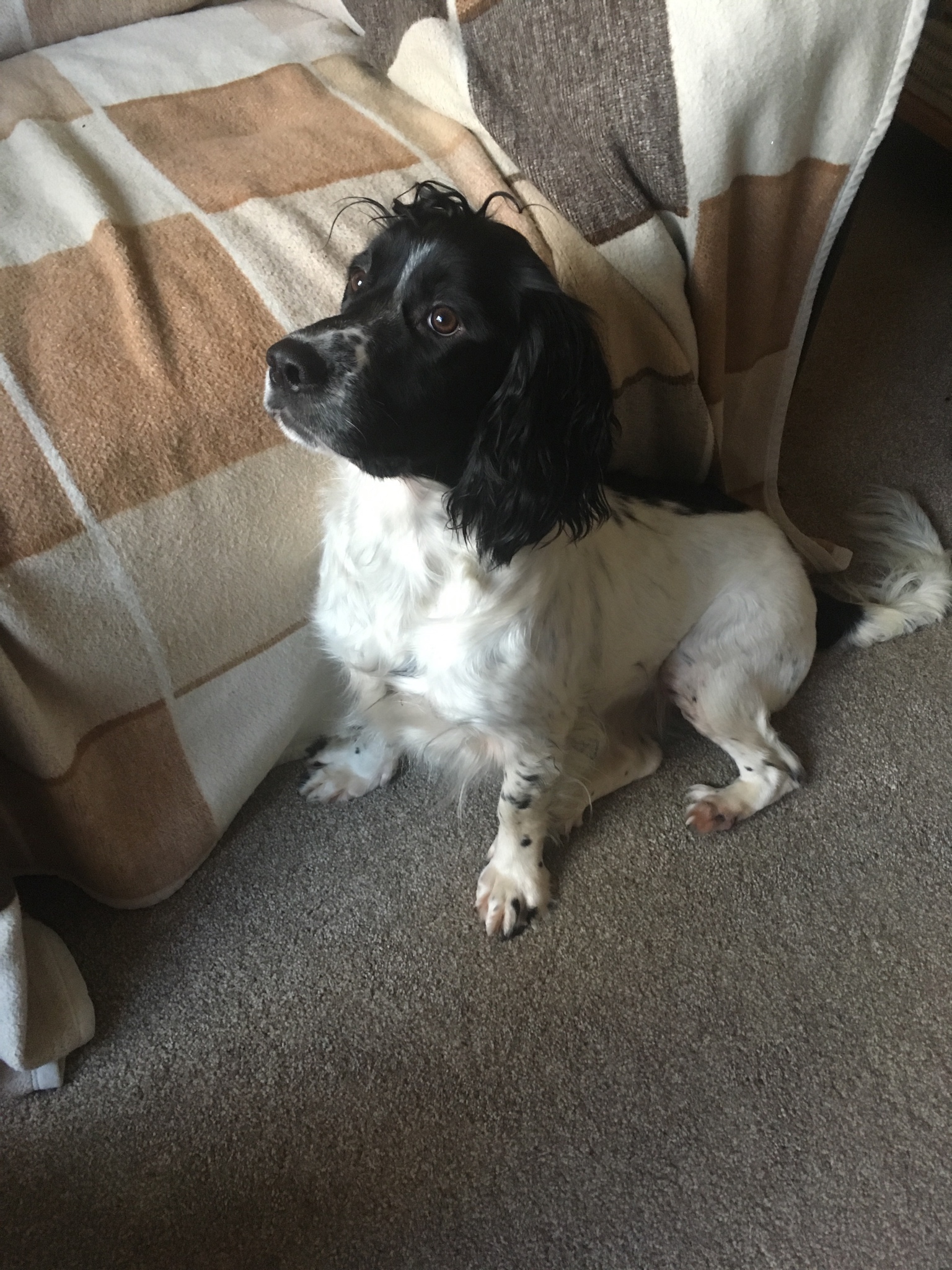 Happiness is a snuggle chair for two!! 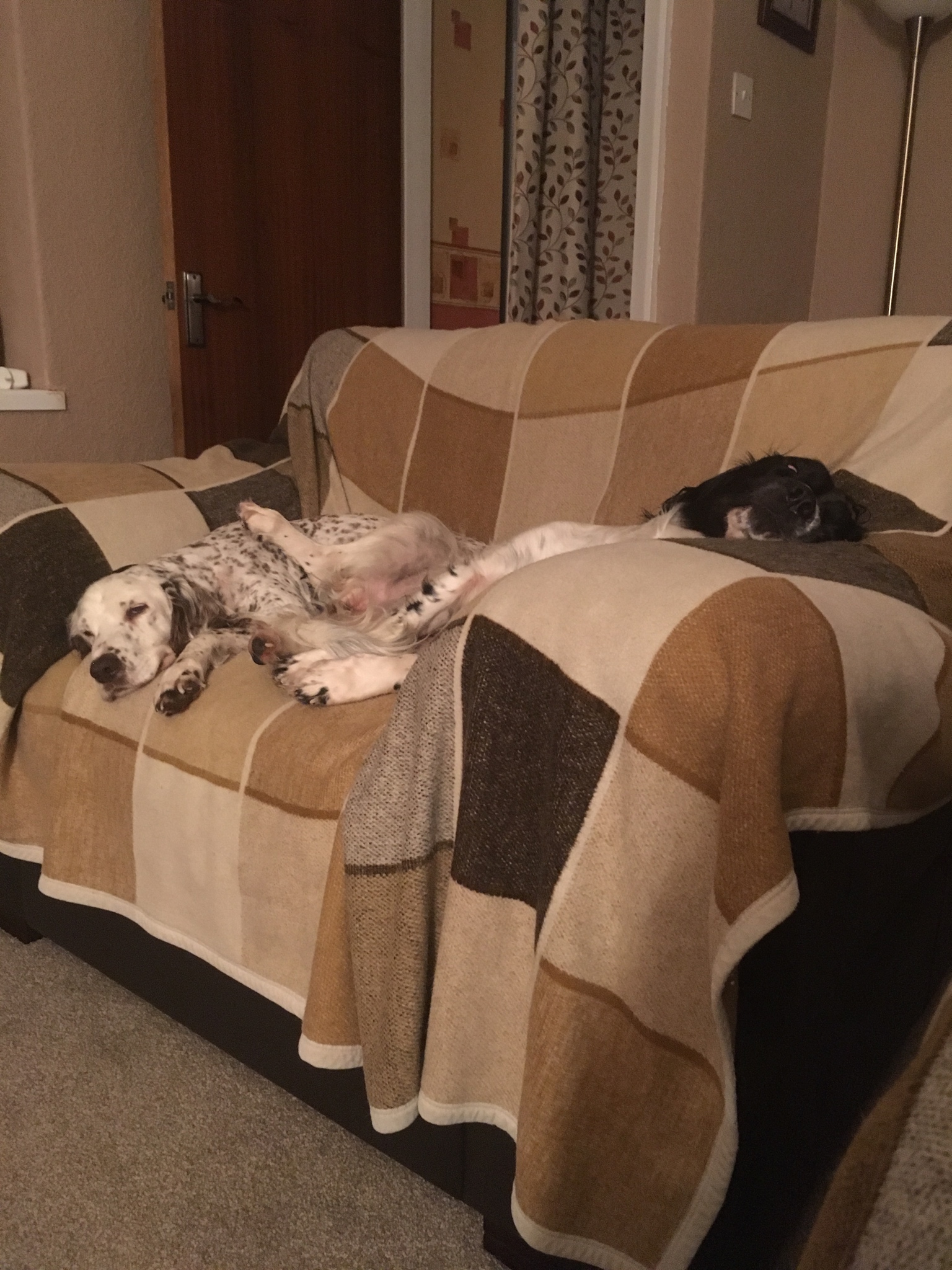 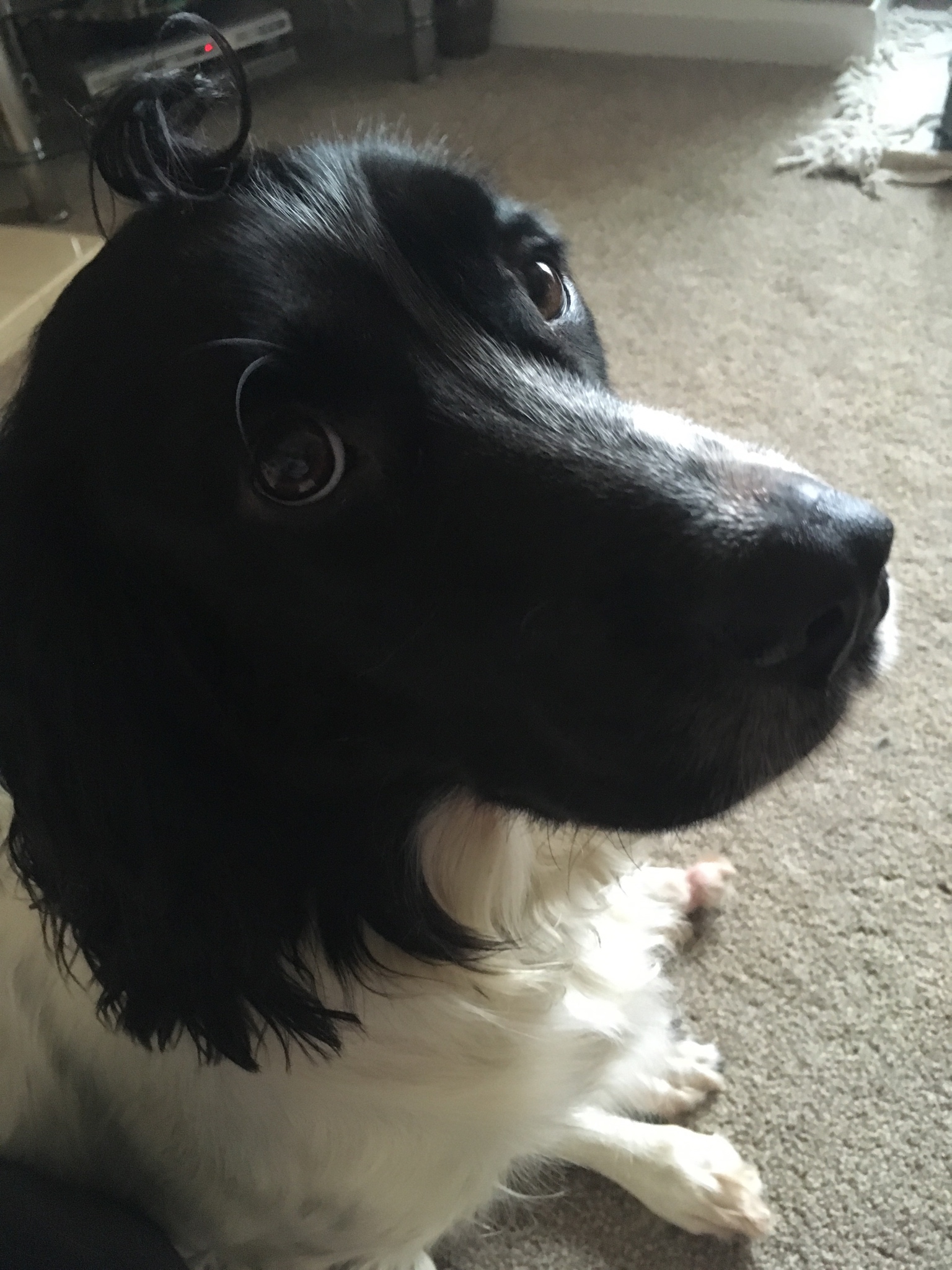 Cage rest is SUCH fun, especially when you're let out for 10 minutes. We played the 'take the bedding out of the crate' game every single day 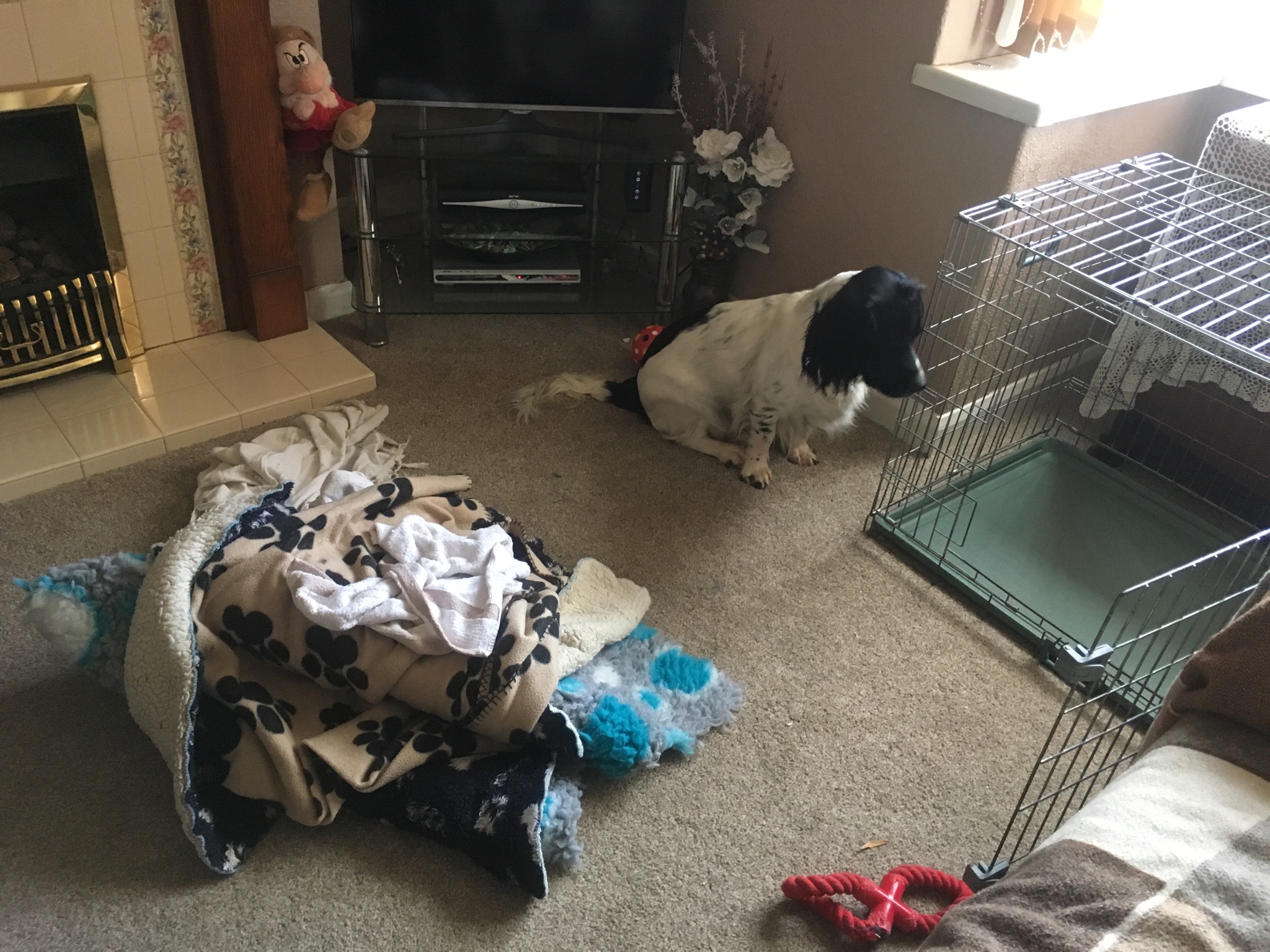 First day back out for a little walk (post op) 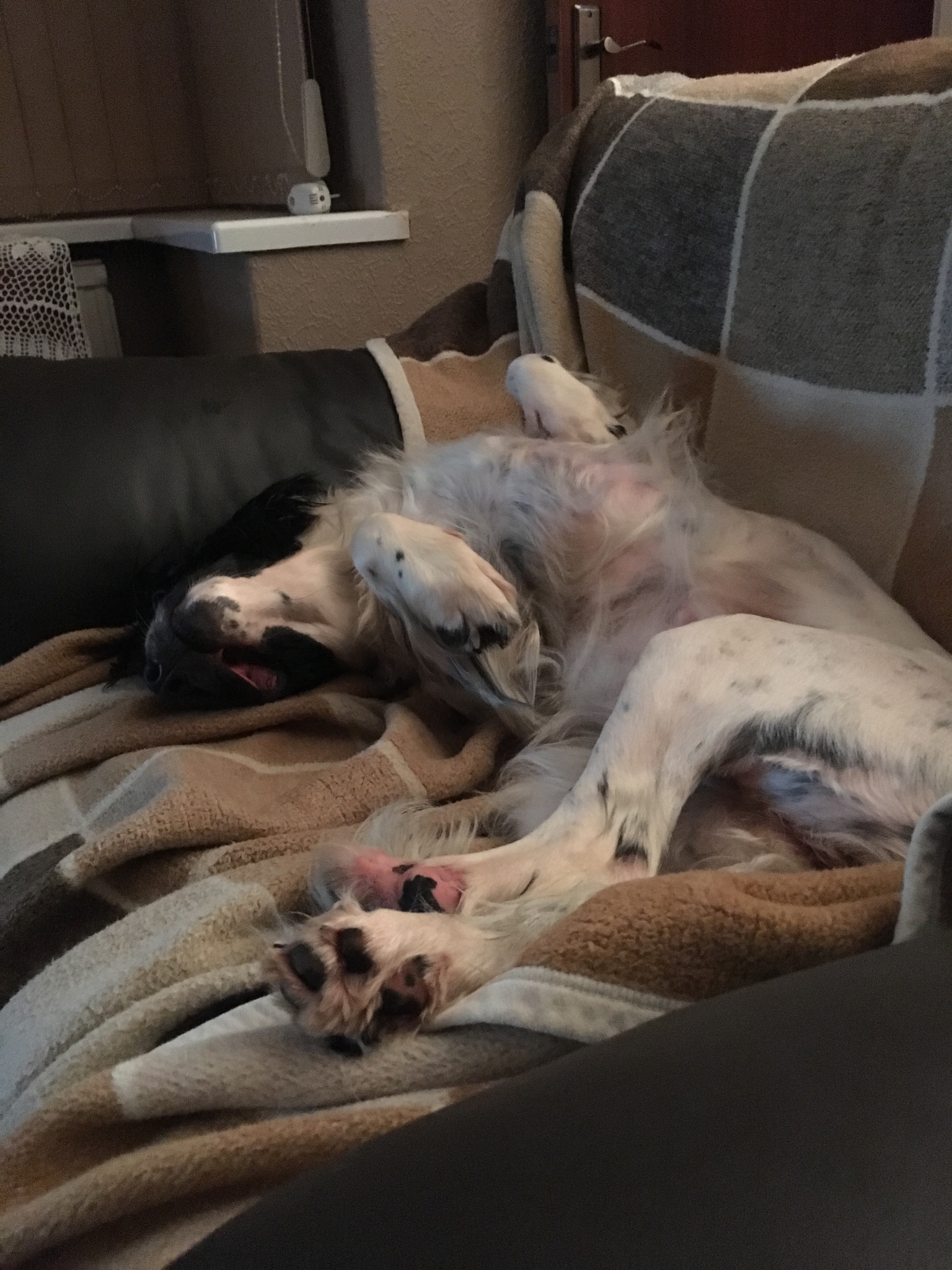 Lovely post and photos, pleased to hear sheâ€™s found her way in the world with you x

Fabulous update, she looks to have well and truly landed in her feet with you.

She most definitely has landed on her feet with you xx

lovely post and pics. cant remember, did you try a gencon lead to try and stop her pulling,,,there have been a few posts about dogs pulling on the lead so maybe not you...my friend has a nutty trailhound who is really hard to control on a normal lead or a harness but in the gencon you can control him with your fingers only. may be worth a try if you havent already..

Sliplead turned into a figure of 8. Honestly, even Bear the train is a model dog with this.

cinnamontoast said:
Sliplead turned into a figure of 8. Honestly, even Bear the train is a model dog with this.

She still looks like one of mine! ðŸ¤­
Click to expand...
We've tried the figure of 8 with the slip lead but she goes into a bit of a panic with that on for some reason. At the moment she's walked in a Halti and we start off lovely but then she even pulls into that. I want to try and borrow a Gencon and see how she takes to that. Most of the rescue spaniels pull like a train and that's worked on a big percentage of them.

My plan (at the moment) with her knees is just to see what happens. Part of me wishes I'd done this from the start but my vet persuaded me that surgery would, and I quote, "give her the best chance of a future". 90% of the time she's on 4 feet but then she does the hop when the left knee dislocates. Problem is, you're never quite sure if it's her knee or the foot (that isn't a foot) that makes her hop.

Hopefully more weight loss, muscle build up and NOT being in a bloomin crate for 22 hours a day will now give her bones chance to repair slightly, although a lot of damage is already done and permanent sadly.

Really pleased to hear your update. Sheâ€™s blossoming under your care.
V

What a lovely little girl. I happened across this post quite by accident and actually work for Gencon dog head collars, please do make content either on here through a direct message or on one of our many social media accounts and we would be more than happy to send her a lead (free of charge) as she sounds like such a lovely girl.

What a kind offer from Vendeemum.

If you find the Gencon does not suit her - some dogs are unhappy with head collars - then it might be worth trying a front attachment harness, if you haven't already done so.
Last edited: 6 December 2018

Vendeemum said:
What a lovely little girl. I happened across this post quite by accident and actually work for Gencon dog head collars, please do make content either on here through a direct message or on one of our many social media accounts and we would be more than happy to send her a lead (free of charge) as she sounds like such a lovely girl.

Thanks
Click to expand...
I think I've sent you a PM but I'm not convinced I've done it right - it could have gone to Santa Claus

Hopefully you have received it
V

deb_l222 said:
I think I've sent you a PM but I'm not convinced I've done it right - it could have gone to Santa Claus