TheMule said:
My mare is this way inclined and I've battled with the 'spooky hedge side' and 'corner of death' for ages. But I have to say, I started doing the TRT groundwork with her with a specific focus on getting her to learn to relax near her areas of doom and it is now like schooling a different horse. She will still have a look and I need to come back to the fundamentals a couple of times in most sessions, but it has made such a difference to my rate of progress with her. And it only took 3 sessions of set up and 5 mins at the start of each schooling session.
Click to expand...
I'll take another look. I did try with another horse but she struggled to translate it into ridden work. Our school has hedge of doom on all 4 sides, only gap is for the gate, there's no safe space 😒 there's also a green lane behind one side used by everything from walkers to scrambler bikes, invisible monsters! if I'd known it was that bad I'd never have gone there 😬

Gorgeous weather here this weekend, cool but the sun is out with a light breeze. L and I have come to an understanding about schooling on hacks, she’s paying more attention to me than the scary sights now 😂 will also trot long and low up hills rather than gawk at the kangaroos now! I’ll call that a small victory for me 👍

Have a great weekend all, stay plague free!

I had a lie-in til 8am! Cats woke me up earlier but I managed to doze back off. Heaven!
Girls are now living out aside from an hour in later to be worked. They barely lifted their heads from the grass this morning to acknowledge my existence..!
Z

I'm hoping to do something (anything!!) with my lot this weekend. Work has gone bananas, I'm usually lucky to do 30 hours plus my one evening teaching at this time of year but have done 57 hours this week!! I'm glad to see some rain, it's pretty firm here now so hopefully it will rain a bit more, with breaks so I don't get soaked.

Well, as i picked this weeks clinic exercise i probably should have done that. But i filmed my prelim stressage instead

It has FINALLY rained here! Our tanks were getting really low so hopefully we get some more. Just hacking as per usual but hopefully the ground will be softer.
W

Roxylola said:
Well, as i picked this weeks clinic exercise i probably should have done that. But i filmed my prelim stressage instead

Click to expand...
Looking good, shame about the wee jog on the FWLR - lovely rhythm in the trot work

Looks good! Not brave enough to post mine! Are you using a camera that is tracking you? Not a person on the ground?? If so which one. I did not know such a thing existed and it would be very useful. X

Oh thanks guys, I know wheels, I pushed too much :| I am only doing it once though as if it's a comp.
AE my owner filmed but I've heard talk of pixio and pivo as camera things that track

Oh wow your owner has a very steady hand! Very quiet too. On my video I can hear all manner of breathing, yawning and sniffing!

To be honest I'm surprised there isnt a load of wind noise as it was really blowing yesterday.
I'm almost disappointed now that I didn't share more of our early videos etc on Facebook and the like. They were dreadful, he couldn't really muster a canter at all on the left rein and the right was shambolic. To now having a genuine reliable transition both ways and be able to ride the canter is such an achievement. I knew it was in there but hes so clever and trainable.
The funniest thing was at the end I was messing asking him to be a bit nicer in his halt and he was arguing and fidgeting, we ended up stood front legs over a board. Now months ago, his owner trained him to walk sideways over a pole like that for something she was working on. He never reliably cracked it, and hasn't done it this side of xmas. So because I was putting pressure on and he wasnt quite sure why he set off sideways down this pole - no aid from me at all, I was literally just asking him to relax to the contact in the halt. Got to the end of the board and he just stopped and stood. Amazing what they retain

I've got old video on YouTube so I can look back which is helpful. But not confident to share stressage on here. Which is silly really as there's nothing wrong with being wherever I am with my riding! It's not exactly shameful to make mistakes, lack some skills and have plenty of room for improvement.

Think Amber has tweaked something 😥 . Tense under saddle and humping/bronccing. Took some video on the lunge and she doesn't look comfortable. Not lame but not happy. Fingers crossed it's nothing much.

To be honest I was a bit apprehensive about sharing, I can always pick holes in my riding myself anyway I dont need anyone else to do it. Dont feel obligated to at all just because I did though
Oh no that's pants AE although I guess now is a better time to do it than mid season with comps booked. Hopefully its nothing major and settles down soon
W

Sorry to hear that amber is a bit off

Decided to do a bit of painting. Never painted on a canvas and never properly with acrylics! Wish me luck for the rest 😂

I’ve some visual Rooni spam for everyone!

He had a jump on Monday, and was a bit of a fart at getting going. More interested in doing handstands round the arena than getting over my little 3 jump course I’d concocted!

He then schooled a few times and is showing some really promising work.

Bulked up in the past few weeks and the work has really come on - we have recognisable HP and a few half steps. The right to left change is very sweet but the left to right needs some polishing!

He hacked today and was good except one dicky fit at the poly tunnels! Tomorrow, in hand work for a change and then schooling Tues

rosiesowner said:
Decided to do a bit of painting. Never painted on a canvas and never properly with acrylics! Wish me luck for the rest 😂 View attachment 44787
Click to expand...
That's amazing, I can't even draw stick people!

Nikki, every time I see photos of you I'm just so envious of your physique, I mean your clearly stunningly fit and slim but I just look at your length of leg etc and dream - you look like you were designed with riding in mind, I look like I was designed with a weeble in mind
I also love your matchy you both look fab

I sat on Bog very briefly for a few min on his walk. Bit of a spur of the moment thing tbh, it didn’t involve any tack . It was like putting on my favourite shoes and he was super happy, think he thought we were going to go for a hack. His legs are back to normal after bandage gate which is great. Just need a flooded bit of land to dry up so I can hack him properly.
Bear was long reined and a good boy.

Roxylola said:
Nikki, every time I see photos of you I'm just so envious of your physique, I mean your clearly stunningly fit and slim but I just look at your length of leg etc and dream - you look like you were designed with riding in mind, I look like I was designed with a weeble in mind
I also love your matchy you both look fab
Click to expand...
That is really kind - I do work hard to be as fit and supple as I can possibly be, but the physique is an advantage I guess!

We had a productive day. The old stables got a revamp and we knocked 2 into 1 for a foaling box. Bit more to do but its mostly done. The new front will fully open out to use as a run in shelter later on, and then it can go back to being big baler storage
Main field got harrowed too. Didnt finish til 7ish so Darcy had ANOTHER day off 🤣 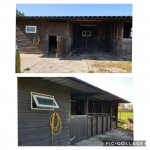 Nikkimariet you both look absolutely amazing !

Ambers Echo said:
Nikkimariet you both look absolutely amazing !
Click to expand...
So kind! I can only say thank you! I’ve been really working on my core strength (due to my arthritis I’m really limited as to what additional exercise I can do, under strict instructions never to run again ) and I do think it shows!

As much as I love the pics they are SO helpful. I spotted a few things in some from 3 weeks ago that I didn’t like at all and I was absolutely determined I was going to change them!

And although Rooni now appears to be in season lol he is a good egg really. There are so many things I can’t wait for re CVD19 and returning back to normal but purely in my own heart and life I long for competing again. But it’s given us both a nice break anyway!
M

We schooled - for the first time in just over a month! Yay!

No pics as OH was lunging while I rode, but the two I schooled were slightly shocked at the concept - not only were we schooling, when they'd decided that their future was just hacking (and were very pleased with that development), but we were schooling on a sort-of-rolled grassy area out on one of those hacks, which still has little tyre tracks in places and is on a very gentle incline!

My pssm girl tried her hardest but was a bit like, 'I no longer have the muscles for this Mum!' - then she wanted to go for a good canter at the end 'cos she felt cheated out of her fun! Coblet was more amenable to the whole idea, although his eyes were on stalks at the location. We went round a fair few circles spooking slightly at the birds in the woods! It's a good experience for them though, and he is finding a use for the schooling, he needed help on the downhill slope not to lose the circle and end up in the crops/trees!

When I put coblet back in the field (he went second), he went up to my pssm mare (who went first) and had a pony conversation, nose to nose. I imagine he said something like, 'Did she do the circle thing with you too? It was really hard work! I thought she'd stopped doing that!'
You must log in or register to reply here.
Share: Facebook Twitter Reddit Pinterest Tumblr WhatsApp Email Link