So following my other threads I now have a fairly sweet stallion who can be ridden out with mares in season and is generally a nice fellow.

However I've genetically tested him, and unfortunately he doesn't carry anything interesting, so is just a chestnut TB.

I'm just now planning the future and due to neglected feet he looks cow hocked (slowly being corrected). So the question is what to do with him.

To ' effective' - yes, of course. It removes one concern obviously, but will also decrease his testosterone.and at least somewhat modify his behaviour.

Re 'fair' . . .I'm not sure I understand the question? Do you mean will he 'miss' breeding? If you're not going to use him regularly I think it would be much more fair to remove the pressure than simply deny it.

It is a potentially more complicated procedure in an older stallion, especially one that's been covering, due mostly to bleeding risk, so some vets prefer they be done in clinic, fully sedated etc. But I've seen older stallions done at home with no problems too, it's just a bit gorier.

It's very common for horses to be cut for import from Europe to North America - often very expensive, successful horses - and it's generally considered to be no huge deal. I have seen dressage horses lose a bit of 'presence' but generally ones that weren't bringing much else to the party anyway and I've seen others that have improved due to an increased ability to concentrate. Eventers and jumpers often seem to improve!

Out of curiosity, what were you looking for specifically with the genetic testing? A particular family association? Colour? (If so, what in a chestnut?) The 'speed gene'? I've not heard of that being done before but it's been years since I was heavily involved in breeding and no doubt things have moved on.
F

Thanks TarrSteps - by fair I mean, if its not going to change his behaviour then there wouldn't be much point at this age?

My goal would be to allow him to live out with more horses, at the moment I do think my geldings would eat him for breakfast. I'm a bit loathe to put him in as he was fairly battered and bruised from meeting my mare (yes deliberate cross)

His sire is Racey Remarque so I was looking for the frame gene, but unfortunately he didn't inherit this!
Last edited: 4 June 2013
F 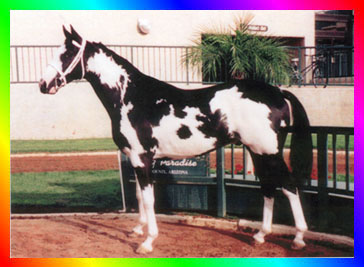