We had a really tough weekend that was good on paper, but the paper doesn't tell the whole story! I knew this weekend would be a challenge, the grounds we were at have a huge atmosphere with warmups for all 3 phases next to each other (and intermingled!) and dressage right next to SJ and XC! It's a big deal for a little off the track horse.

Hen came out on his toes for dressage and he warmed up well but lost the plot when the pony in the area behind us cantered right as we went in. He buck and cantered down the centerline, but I pulled it together and we salvaged the test to have some reasonable work. Somehow I think the judge must have been asleep, because we got a 6 for our entry ( I expected a 3!) with a comment of 'slightly above bit'. I needed a gin after we were done but I was proud that I pulled us both together and we ended up with a reasonable score. It was the first time I have felt totally in the zone and riding the horse rather than the test so even though it could have been better, it was progress in that vein. 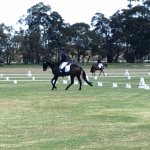 SJ and XC were Sunday so after a fun night camping with friends (and wine!) I was up early to help my friend before SJ. The course was proving tricky with very few clears, and a tight time. Henry was full of it again and I had to really mange him in the warm up. He was easier to ride in some ways though, and I could actually jump fences without having to wrestle him near them so that was an improvement.

I felt him sigh from relief and relax when we went into the ring, and he put in a lovely round to jump clear and just slightly too slow. I ride good line and was moving forward well, it was just so tight for time! He was one of the few horses to leave all the pole up though so I was very happy, and it was one of our best rounds. We usually have a slight communication error when we see a different takeoff, but we were on the same page the whole round and he was jumping really well. Very pleased.

XC was later in the arvo, and it was hot. I wanted to keep the warm up short given his antics and so I hopped on and warmed up quickly. Again he was a handful but focused on the work and was the best he has ever been in a xc warm up. I was able to jump a few things at angles and he was adjustable, so I kept him busy until it was our time. Walk wasn't an option apparently so we trotted around before we cantered(!) to the start box.

He came out the start box and was immediately on the job, setting a good forward pace from the start. he jumped the first 2 fences slightly long, but I wasn't worried because the canter felt good. he jumped confidently through all the questions, just having a slight wobble at 9AB, and bending line to a skinny where he wasn't sure if it was his jump. I blocked him from drifting and put my leg on and he trusted me to go, and he felt brilliant around the rest of the course. He finished clear but too fast, picking up 2.4 penalties. He was again one of the greener horses to go clear, there were stops all day! 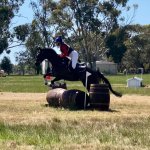 We finished 9th out of a huge, very competitive class, and I am very proud. We both stepped up into the job, and I actively rode the the horse, I was brave and confident and so was Henry. I as so proud of him. Next time we will hopefully have a more relaxed dressage, but I had expected it at this event and even so he was easier to manage than I thought. Next time I will hopefully be better on time too, but he was was bowling along so nicely that I didn't want to interfere too much.

Well done! Sounds like you both had an excellent weekend.

Well done! I desperately want to get out competing, but we have no events close by with a newcomers level :/ Oh well, always next year!
Henry looks super!

Well done! Its always a good day when they are on side!

You both look fab, well done!

Great report and fab pics! He looks so fit and shiny
The plan for Malachy is a couple of ODEs next year- is it true they are all spread throughout the weekend, rather than on 1 day, despite the name?

Location
Somewhere south of the middle

KEK said:
Great report and fab pics! He looks so fit and shiny
The plan for Malachy is a couple of ODEs next year- is it true they are all spread throughout the weekend, rather than on 1 day, despite the name?
Click to expand...
Thanks! Yeah pretty much everything runs over both days. Swan River does the 65 in one day but it's the only EA event that does. Wallangara have one days, but they are PC. 2 days is good, you get plenty of time to socialise and it's fun to camp over night, plus you don't have to rush around walking courses and trying to get your helper duty all done on the same day.

this year they did run quite a few XC only days (under EA, not PC), which might come back next year as they were quite a good money earner.
A

Northern said:
Well done! I desperately want to get out competing, but we have no events close by with a newcomers level :/ Oh well, always next year!
Henry looks super!
Click to expand...
Thats a shame, I always assumed that there would be more events over east but I guess this year has just been a total mess!
A

Thanks all, it was a great weekend, perfect weather! He is certainly fit and feeling very well, he has pulled up brilliantly and demonstarted how well he feels by galloping around the paddock.

Great report and pics, and well done, I love all the positives that you are taking from the day, great attitude.
A

JennBags said:
Great report and pics, and well done, I love all the positives that you are taking from the day, great attitude.
Click to expand...
It was a very tough weekend, but he's a great little horse and he does try hard even when totally overwhelmed. I am hoping the next few events we have will be easy by comparison and he can take a breath and relax a bit more. Seeing things positively is hard, but it is something I have been working on and it does make for a better weekend!
You must log in or register to reply here.
Share: Facebook Twitter Reddit Pinterest Tumblr WhatsApp Email Link